Thomas Sokat is a loyal caring human being and good at his job. He took care of everything. All I had to do was sit back and wait for my money - Carrie Adkins

Pedestrian crossing the street on a red light got hit and hurt.

Who is liable? Can the pedestrian sue the driver?

My client was an elderly Dublin pedestrian who was struck by a car while in the crosswalk. The investigating officer concluded that my client was at fault.

The motorist had the green light when she struck my client in the crosswalk. We took on the insurance company against all odds. We won.

But not all pedestrians can be judged by the same standards. My client was elderly, and while she stated that she started crossing six lanes of traffic with the light in her favor, she was unable to get to the other side safely.

Complicating the case, there was a witness who said she started crossing against the light.

The indisputable fact was that she was struck by a woman driving a car and who had a green light before she could finish crossing. She was seriously injured and needed significant medical care. What could she do against the motorist’s huge insurance company? It seemed hopeless. 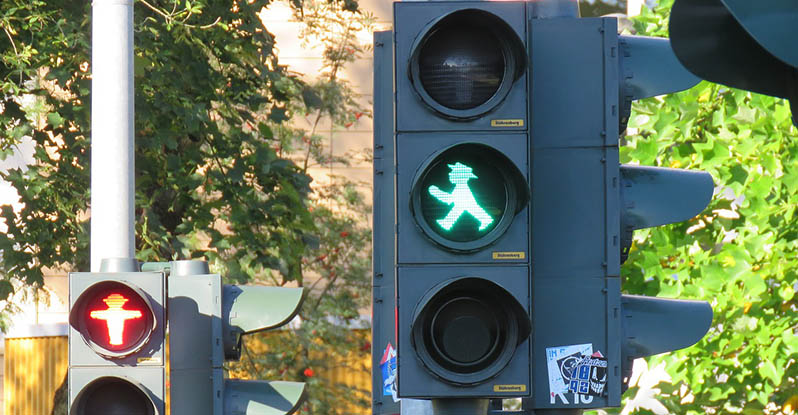 The investigating officer concluded that my client was at fault, and the motorist was without fault. Why?

The case looked grim but we stayed resolute.

It’s a little old lady against the insurance company giant

Just like David and Goliath, I took on this case because I felt that this woman needed someone to stand up for her rights.

I felt the investigator had overlooked some important facts in the case. Not only was she injured, she needed help fighting against injustice. The motorist’s insurance company was a giant, impersonal bureaucracy, rubber stamping “NO” onto the claim for medical care reimbursement.

I was determined to get them to change their stance.

Like David in the story, we fell back on three carefully chosen round stones, aimed at the head of the giant:

As we hoped and expected, with those three convincing arguments we were able to prevail and get a settlement that allowed my client to pay her medical bills and recover from her injuries. By taking on this case, I was able to help someone who needed and deserved it in spite of her being in the crosswalk when the light was red. We showed that the motorist had ample time, distance and visibility to see and avoid my client.

Bottom line, this accident was entirely avoidable since right of way does not excuse the motorist of the duty to pay attention and avoid injuring others.

Had the insurance company been able to prove that my client had started walking on a red light – contrary to my client’s own deposition– the outcome might have been different because according to California law CVC §21950, pedestrians are not relieved of the duty to exercise due care for their safety, and they are not to ‘leave the curb or other place of safety and walk or run into the path of a vehicle that is so close as to constitute an immediate hazard.’

Nevertheless, there could still be conditions under which the driver could be held liable or partially liable even if the pedestrian acted recklessly by crossing on a red light. It’s always best to hire an attorney to help you navigate these waters to ensure you get the compensation you deserve.

Moral of this story? Don’t cross the street alone.

Get a personal injury attorney by your side if you’ve been involved in a pedestrian-car accident.

If you have been injured, and you are not sure if you have a case, call me. Whether it looks like you may be partially or even entirely at fault, there is still reason to speak with an attorney who knows how to unravel the intricacies of the law. I can help determine how you should move forward. Just like for my elderly Dublin pedestrian, I will use all the resources at my disposal to make the case, protect your rights and get you the compensation due you for your injury.

If you’re not in the East Bay (San Francisco area), then please find a personal injury attorney in your area who will take your case. Your rights deserve fighting for.

For more information on why personal injury attorneys may not take your case and why in many cases you should not give up, see this.

Trackback from your site.

Tom is a personal injury attorney with over 30 years experience. He has two offices in the East Bay, one in Danville, another in Pleasanton, and one now in San Luis Obispo. He is passionate about being the champion for the little guy and getting them compensation for their injuries when due.

Do you have a case?
Find out now.

Even if you think you don't have a case, contact me. You may be surprised. In any case, I'll advise you for free on what your options are.

Or submit the following form which will then text us your details.

SEND A TEXT
AND FIND OUT IF YOU HAVE A CASE!

This form will send a text. I'll review the case details you sent and call to set up a free consultation or reply back with some helpful information. There is never a charge until we win!