Thomas Sokat is a loyal caring human being and good at his job. He took care of everything. All I had to do was sit back and wait for my money - Carrie Adkins

Making Mt. Diablo Safe for Cyclists: A Model For All Communities

Mt. Diablo’s the tallest mountain in the Bay Area, and the view from the summit is world-class. Most days the whole Bay Area is laid out for you, and on particularly clear days you can see all the way to Yosemite, Mount Lassen or Mount Shasta.

Thousands of people visit the Mount Diablo State Park every week to hike, bike, picnic and sightsee. Therein lies the rub: the park’s Summit Road is famously twisty, narrow (lanes are 8 to 9 feet), and shared between motorists and cyclists. Before 2014, Mt. Diablo saw an average 23 collisions reported per year, about one every two weeks. 2017 saw 10 in total, and only one car-and-bike accident. 2018 is on track to have even fewer accidents thanks to road safety improvements, and, as of this writing, no vehicular collisions at all (keep those fingers crossed!).

The trend is not random chance, statistical noise, or fewer people visiting the park—in fact, 700,000 people visit the park annually.

What changed, why did the number of accidents drop?

Answer: People who cared got involved and worked to change things. 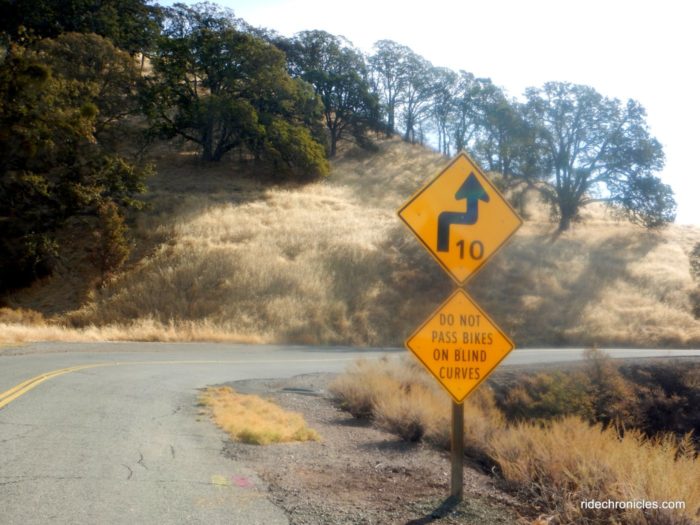 Safety – Now and for the future

This all happened because of Mount Diablo Cyclists (MDC) and the help from the East Bay News Group and California state lawmakers.

Founded in 2014 to make Mount Diablo safer for cycling enthusiasts, the group started by filing California Public Records Act requests for documents and data about safety on Mount Diablo.

With that data, MDC identified frequent accident spots, the reasons why they were trouble spots, and developed plans to head off the trouble – the signs and lines. When park leadership declined to get involved, MDC went to elected officials at the state level to make the case for the improvements directly in 2015. As a direct result of seeing the “clear and present danger to Mount Diablo State Park visitors”, the line and sign improvements went ahead in 2016.

This wouldn’t have happened without MDC, and they didn’t stop!

In 2017 Mount Diablo Cyclists started a new campaign for their next big improvement project: to install bike turnouts where bicyclists can safely move out of the way of cars. MDC had previous installed three of these on a pilot basis, and now wanted to install some 60 more.

A change.org petition went up in November of 2017 calling for their installation, and in December the same California legislators who helped with the road project intervened again, asking park leadership to move forward with 10 of those turnouts that could be implemented for a total cost of $5,000. The remaining turnouts will cost more, but there’s reason to believe it will save lives.

Community involvement can make a difference

Late this past July, MDC posted a video on their Youtube channel showing a full-sized, 40-foot long, bus driving up Mt. Diablo, crossing the double yellow lines, nearly striking bicyclists coming the other way. At some turns, the bus was forced to cross the “no-cross” double yellow lines just to stay on Summit Road. The bus was going much too fast for its size, the numerous blind curves, and the passenger load: a full complement of children.

Even before posting the video, Mount Diablo Cyclists met with park staff about the bus issue, and now the organization is calling on the Diablo cycling community, including Danville cyclists and Livermore cyclists, to contact local and state officials about the dangerous buses. Newspapers and local news stations around the Bay Area picked up the story in early August, but it’s been an issue for years, and the park still has no official policy banning buses of any kind – despite near-misses like the one in the video.

In all likelihood, it’s just a matter of time until one of these busses has an accident. Getting them off the road is the best thing to keep that from happening, and the Mount Diablo Cyclists have the contacts and the experience to do it.

This is how community engagement is supposed to work. Concerned citizens who care about one little thing – like say bicycles on a mountain road – get together and make a plan to fix a problem. Fixing that problem exposes another problem, and they work to fix that one too. The result is a strong, flexible and local organization that benefits the community as a whole.

Nothing that these groups do is unique or uncopyable. You just have to love and care enough and the rest follows.

For more information visit https://mountdiablocyclists.org/. You can sign the MDC’s turnout petition here.

Cyclist Harassments Are Always Too Close for Comfort
What to Do When You're in a Bike Accident
AT&T's distracted driving video hits home
Here’s why an attorney won’t take your personal injury case
Share it!

Tom is a personal injury attorney with over 30 years experience. He has two offices in the East Bay, one in Danville, another in Pleasanton, and one now in San Luis Obispo. He is passionate about being the champion for the little guy and getting them compensation for their injuries when due.

Do you have a case?
Find out now.

Even if you think you don't have a case, contact me. You may be surprised. In any case, I'll advise you for free on what your options are.

Or submit the following form with your case details.

SEND A TEXT
AND FIND OUT IF YOU HAVE A CASE!

This form will send a text. I'll review the case details you sent and call to set up a free consultation or reply back with some helpful information. There is never a charge until we win!